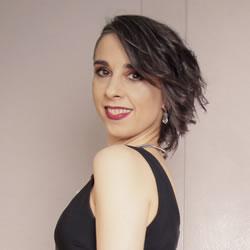 “Pranayama Deep Breathing Exercise. Breathe in through the nose. Breathe out through the mouth. The nose is only a passageway.” I’m already sweating like crazy, and the Bikram yoga class hasn’t even started.

Wait… I am not at a Bikram yoga class…

Whenever I go to Buenos Aires, I always get a sense of trepidation and excitement. I think we all do, us tango dancers. It doesn’t matter whether it’s your first time there, you tenth time there or whether you live there, like I now do. So when I boarded British Airways flight number BA0245, I naturally felt excited. I thought I was very fortunate to live in a place that was fuelling my passion for tango, whilst nourishing me as a dancer and a woman. Then, I fell asleep. I always fall asleep when travelling – by air, by land, by waterways, it doesn’t matter really. In my life, I have had the opportunity to travel a lot – so much so that a friend of mine used to refer to me as being “geographically-impaired”. But of all the flights I have taken, I must have been awake through take-off for about less than 5%. Flights are basically for me a story of: sit-sleep-eat-sleep-eat-watch an episode of Big Bang Theory-sleep-eat-get off.

Flight BA0245 dropped me in Buenos Aires on January 19. Argentinians like to do things big. Big steaks. Strong Malbec. Sickeningly sweet dulce de leche (sorry amigos, we love you to bits but we think our Nutella tastes better than your dulce de leche). Melancholy tangos that grab you by the heart and won’t let you go. Sizzling hot summers. When flight BA0245 dropped me, I was immediately greeted by a humid, hot hug. Not from anyone in particular. Just from the surrounding air. Humid and hot is how Argentinians do their summers.

I know that some people land in Ezeiza, shower and directly run to the closest milonga. I can’t do that. I’ve never been able to do that and never will. When I land, my body screams “Sleep”– although I’ve normally slept the whole way already. I don’t know why my body does that to me, but that’s the way it is. So I land and then I sleep and then I don’t go to milongas for a few days. I don’t go to milongas until my body stops screaming “Sleep” and starts screaming “Tango”. Then, I have to go. I have to drop all things and start tango-ing immediately. 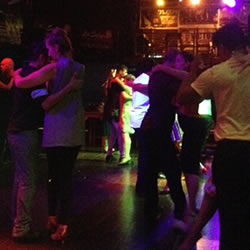 As a result of this now well established personal routine, I picked La Parrilla (“Barbecue” in Spanish) as my first milonga in Buenos Aires. I picked La Parrilla because it’s one of my favourite milongas porteñas. The venue itself is very atmospheric. The milonga is relaxed, casual and the level of dancing is really high. Music is good. There’s a nice buzzing energy. It’s a compelling, addictive mix. I was really looking forward to it. Actually, I think that as I fell asleep on the flight BA0245 before take-off, I was already dreaming of being back at La Parrilla.

I got there early because, like in all milongas porteñas, the dancefloor gets really crowded around 1am, so you want to arrive very early or very late. I am normally a very late kind of milonga girl but I can also do very early as I successfully demonstrated on that particular Monday. When I arrived, I was welcomed once again by a humid, hot hug. A very humid, very hot hug. Too humid actually. Too hot actually. Once again, not from anyone in particular… There had been an electric fault in the barrio, a fuse had blown at La Parrilla and there was consequently no air conditioning. I am not a big fan of air conditioning because they make my throat hurt almost immediately but I have to say that a January Milonga in Buenos Aires without air conditioning is a bit insensitive. Let’s drop British politeness: in a January milonga in Buenos Aires without air conditioning, it is hot enough to scold a lizard. Or grill a steak. It is BOILING MAD.

Then came the Parrilla contest exhibition, to save us from more collective dehydration through perspiration. I thought: “Let there be selective dehydration for a while”. What is the Parrilla contest exhibition? Simples. People sign up to dance. The organisers randomly pick the names of two women and two men, form two couple who compete against one another in an improvised tango. Normally it’s a fast tango with a wicked variación. I really enjoy the contest; it’s fun to watch. Often couples who are the most mismatched in terms of height or size end up being the best one on the dance floor.

Then came two stunning performances of the kind that only la Parrilla has the secret of.

Then I called it a day and went back home.

The next morning, when I woke up, my skin was glowing from all the detox of the night before. Cheaper than a beauty salon appointment. Definitely worth it.

The next morning, when I woke up, the following thought came to mind: it is really important to pick wisely your very first milonga porteña, because apparently, when things go wrong, they have the power to turn into what their names say they are. La Parrilla turned into a BBQ. Arguably, it could have been better, I could have gone to “La Rosa” and enjoy walking, queen-like, on a floor of red petals. Arguably, it could have been worse. I could have gone to “la Mantícora milonga”. A manticore, for those who don’t know, is a mythical animal depicted as having the body of a lion, the head of a man, and the sting of a scorpion. Food for thought.

In all cases, if you want to find me next Monday night, I’ll be at La Parrilla.

We are (‘small tango’ in spanish – pronounced tang-eeto)! We live and breathe tango and have been told our passion is contagious. We do all things tango-related: classes, milongas, events, clothing & holidays to Buenos Aires.