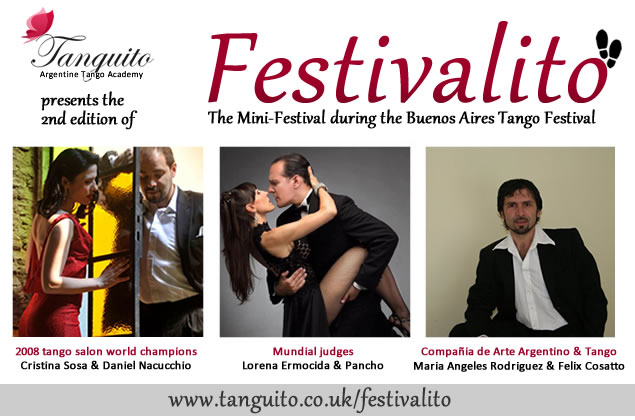 We are very excited with the line-up of world class professionals featuring in our 2nd yearly tango festivalito in Buenos Aires. They are all acclaimed for their dancing personality, outstanding performing skills and teaching style.

Classes will focus on fundamental elements that will truly make a difference to your tango dancing – connection, fluidity, elegance, musicality.

Classes will be from 11.45 to 13.15 in a beautiful dance studio close to Galeria Pacifico in the centre of Buenos Aires.

Registration is required. Limited space available. To register, simply drop us a line.

Cristina & Daniel began working together in mid-2007, by performing in private shows and in the “Complejo Tango” show. In mid-2008, they took part in the Metropolitan Tango Championship, which they won in two categories: “Salon Tango” and “Milonga”. Thanks to this triumph, they could take part in the Salon Tango World Championship, which they won, and became Metropolitan Tango Championship. They are the first dancers to get the three most important awards of Salon Tango in history.

Daniel is a dancer, teacher and choreographer of tango. At the age of 16, he started working with notable proponents of the Villa Urquiza style. He has worked in numerous countries including Japan, Taiwan and the USA as the main dancer in numerous shows. He started dancing tango at 16 with 20 of his friends from school. The greatest influence on his dancing has been the Villa Urquiza milongueros and in particular, Alberto Villarrazo, who mentored him from the beginning.

Cristina started dancing at the age of 9. At 18, she discovered a passion for tango. She became a dancer and choreographic assistant in the show “Piazolla Tango” and has performed in various tango shows.
Together, they have developed a very deep and pedagogical way of teaching and they are renowned for their generosity as teachers.

Lorena and Pancho both have long and fruitful tango performing careers. Lorena has worked in documentaries and films, including Evita and has toured the world for many years. Pancho has rarely left the stage for very long: Red Ink, Café Tortoni, La Cumparsita, Taste of Tango, Friends of Tango are some of the tango shows he’s been in.

Lorena Ermocida graduated from the Academy of Classical and Contemporary Dance, and studied Argentine Tango with teachers like Gloria and Eduardo Arquimbau, Gustavo Naveira and Olga Besio, Mingo and Esther Pugliese, Antonio Todaro.

She worked as a dancer and teacher in the Gallery of Tango Argentino, and participated in several documentaries and films like Evita. She worked as a choreographer and dancer in various programmes, such as the Gotan project with Juan Carlos Copes and Tango x 2. With her partner Osvaldo Zotto, she worked with the singer Julio Iglesias from 1999 to 2008 and performed at the Metropolitan Opera House in New York, the Royal Albert Hall in London, l’Opéra de Paris amongst others.

She worked in Europe, the U.S., Canada and Switzerland. Lorena won the Massine Positano Prize for her contributions to tango and has for several years participated as a judge at the World Tango Championships of Buenos Aires.

Pancho has made numerous presentations in tango shows including Red Ink, Café Tortoni, La Cumparsita, Taste of Tango, Friends of Tango. In 2002 he participated in the musical choreographed by Mora Godoy, at the Teatro Nacional, which won 5 awards ACE. He also participated in the film Fatal Tango directed by Carlos Copello, as a singer, actor and dancer. In France, he won a silver medal with Argentina Dance Group in the International Dance Festival of the Pyrenees and Dijon.

From September 2005 until January 2009, Pancho was captain coach of choreography and toured with the dance musical Tango. In 2011 he joined the cast of the musical life Tita … Tango Time. Since 1996 he teaches Tango in Argentina and countries around the world.

Felix’s in-depth knowledge of multiple dance forms combined with his mastery of tango is what gives him his solid, clear teaching framework. His emphasis on the connection and the embrace, together with his ‘no non-sense’ approach means that he’s quintessentially devoting himself to training milongueros.

One thing is certain about Felix: his passion for dance in general and tango in particular knows no boundaries. Felix started studying Argentine folklore and tango at the age of 11 before venturing into contemporary dance and ballet. Throughout the years, he perfected his knowledge of tango with renowned teachers such as Mingo Pugliese, Javier Rodríguez, Raúl Bravo, Gabriel Angio, Jorge Firpo and Rodolfo Dinzel, the creator of the Dinzel system.

His dancing career started in 1996, when he joined the “Compañía de Arte Argentino” and later the “UBallet ARgentino”, with which he toured France and Italy.

In 2007, Felix decided to devote himself to tango. He started teaching in Buenos Aires, and now regularly takes part in tours and festivals in Argentina and around the world. He’s a regular guest teacher in Ireland, Denmark, Sweden and Qatar.

HOWEVER we now offer a weekend IN-PERSON Workshop & Practica for a small number of fixed couples (Improvers and up): DETAILS
Friday evening classes for SOLO DANCERS are ONLINE at 7pm (FOLLOWERS) & 8pm (LEADERS), More info
We now offer SUNDAY classes:

- Fortnightly, IN-PERSON Workshop & Practica for a small number of fixed couples (Improvers and up): DETAILS

IN PERSON, or
ONLINE via zoom or skype, either customised each time or following our private courses. Please also check our private classes page for packages.
Great to progress quickly!