“Así se baila el tango”, “This is how to dance tango” is one of the tangos from Tanturi’s orchestra which from the early 40’s, started to focus on the dancers, e.g. the “milongueros” of the time. “Al compás de un tango”, “El tango es el tango”, “Cuatro compases”, “Canción de tango” are other famous examples of this epoch. These tangos were all sung by Alberto Castillo, but “Así se baila el tango” is the one which became a hit and went down in history. 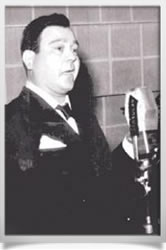 On one side, the lyrics can be taken literally: in this song, the popular class aims to reclaim tango as theirs. It was a common feeling amongst the people that tango belonged to Buenos Aires’ poor neighbourhoods and not to the high society who had come to discover it later.

However, this tango was written at a time when the influence and power of Argentina’s work force was growing. “Así se baila el tango” can therefore be taken more broadly as an act of defiance of the lower class to the upper class.

“Así se baila el tango” was no doubt immortalised by Castillo’s personal and controversial interpretation. Many things about Castillo were unusual and caused sensation, especially the way he had to start rows. He used to sing “What do they know the dandies, the trendy rich boys with their affected manners!” with so much passion, that some of the well-off spectators sometimes felt insulted and answered back. He would then step down from the stage, start a fist fight and then carry on singing, apparently indifferent to how messy his outfit had got.

Quite a song and quite a character, we dare say!

More information
All other days & times: Private classes available, including weekends, both IN PERSON and ONLINE. Please check our private classes page.
Great to progress quickly!