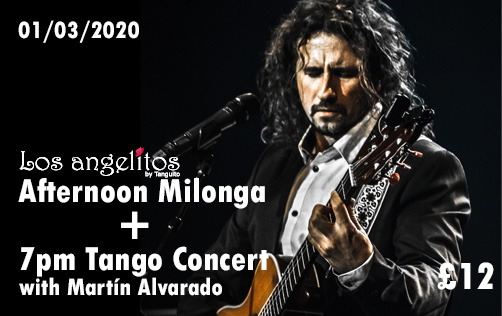 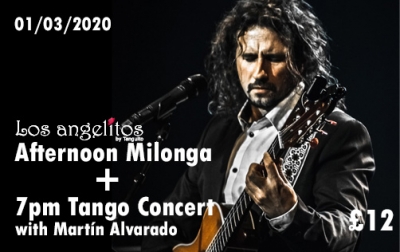 On 01/03/2020, enjoy both LOS ANGELITOS milonga and a tango concert with Tango star Martín Alvarado, making a whistle-stop visit to the UK – only one concert in London!

Date and Time: 01/03/2020. MILONGA LOS ANGELITOS: 4.30pm – 7pm with DJ Bruno, followed by Martín’s tango concert, 7pm – 8pm.
Location: Los Angelitos, Unity hall, 277A Upper Street, ANGEL, London N1 2TZ (go to the hall at the end of the small alleyway).
Ticket: This £12 ticket includes both milonga and concert (does not include the pre-milonga workshops).

Martín’s UK tour will be part of his 47th international tour performing as a soloist and takes in concerts in Finland, Italy, Spain and Russia, where he will be performing in a spectacular tango tribute at the 8,000 seat Kremlin Palace Concert Hall in Moscow for the fifth year in a row.

His concerts in Finland include dates with Finnish with whom Alvarado released a new album, Alma, together with pianist Alexi Tuomarila and jazz sax Eero Koivistoinen, and performed a sell-out concert in Buenos Aires at Centro Cultural Kirchner, then performed the album at Uruguay’s Teatro Solis, in Montevideo.

In December 2019, Alvarado was named “Academico” (Maestro) by the National Academy of Tango in Buenos Aires in recognition of his distinguished career.

Alvarado has an unforgettable warm tenor voice with incredible nuance and colour, and his performances always delight the audiences. Buenos Aires-born Alvarado discovered his talent to sing at a young age and counts Stevie Wonder and Deep Purple’s Glenn Hughes as inspirations. Alvarado is increasingly recognised as one of the most significant vocalists in the history of tango, celebrated both in the media and by his peers who have called him “the best voice in Buenos Aires” and “21st Century voice of tango”.