What makes tango more relevant to us than the “bourrée Auvergnate”?

What makes tango more relevant to us than the “bourrée Auvergnate”?

Tango was born on the other side of the globe, over a century ago. Why is it still relevant to us now, when the bourrée Auvergnate and other folklore dances around the world are dying a slow death...

Why tango back then?

Imagine millions of immigrants from around the world… They have no common language; the only thing they have in commmon is dreams to make it big in the Americas and the longing of having left everything and everyone they loved behind. By voicing the feelings, the hopes and fears of a porteño population who had otherwise no political or economic voice, one thing is certain: tango made the integration of millions of immigrants easier.

First came about tango music. Immigrants didn’t have much money but they had brought with them their own culture: their music, their instruments and their dances. Too many immigrants? Too much poverty? No common language? To overcome the harshness of their new home, porteños from the poor neighbourhoods gathered at night and called upon the most universal language of all to soothe it all out: music. The first tangos were played with a guitar, harp, flute, and sometimes an accordion.

Tango lyrics really took shape from 1917, and tango music inspired many very talented poets. Lyrics mainly deal with topics that concerned the majority of the population: the hardships of life, poverty, love (or rather lack of love), solitude, whilst providing an outlay for people’s dreams of fortune, travels, luxury, and wealth. These themes brought people together by giving them an identity and a voice.

If you are a fan of tango lyrics, you’ve probably noticed that they never mention anything that could create divisions such as politics or religion. In a country obsessed with football, there’s not a single song talking about it. That says a lot, doesn’t it?

By giving a nation a beat, tango gave it in fact a heartbeat, the heartbeat of a rich and sensual dance and of two people whose encounter on the dance floor leads to rich and endless danced conversations. Tango developed from Walz and Polka, the other two dances where both partners face one another but it is the first dance to have incorportated a very important ingredient: improvisation. 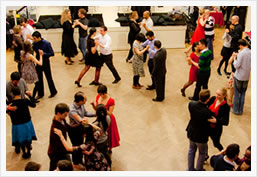 Social integration, the purpose tango fulfilled in the 19th century might be the reason behind its 2nd growth around the world in modern days. Tango at its origin filled a feeling of loneliness, and nowadays it still helps bring people together. In big cities like London when most people don’t have the time or the energy to explore their own neighbourhoods, tango still help bring people together in an artistic encounter of self-expression. In the impersonal environment we live in, tango provides a way for people to express themselves, no matter who they are, where they come from, and whether they in fact speak the same language. Speaking tango is all that is required.

On the dancefloor, everything becomes irrelevant, apart from the music and the embrace. We can all express our hopes, our anxiety, our most intimate selves, and that’s what makes us come back to tango again and again and again.

See you soon on the dancefloor.