La Cumparsita (“the little parade”) is without doubt amongst the most famous tango tunes of all times. Dancers and non dancers alike associate the tune with tango within just a few bars of hearing it. Read on to learn about the story behind the song…

The birth of La Cumparsita

In 1916 as Fripo was playing in the café La Giralda in Montevideo, a young architecture student called Matos Rodríguez came to see him. He had brought a march song he had composed for the Uruguayan Carnival which he wanted Firpo to review. Firpo looked at the music and quickly determined that he could turn it into a tango. The march had two sections; Firpo added a third part taken from his own little-known tangos “La gaucha Manuela” and “Curda completa”, and also used a portion of the song “Miserere” by Giuseppe Verdi from the opera Il trovatore to complete the song.

At night, he played the new tune with “Bachicha” Deambroggio and “Tito” Roccatagliatta. It was an apotheosis. Allegedly, Matos Rodríguez spent the evening walking around like a champion. 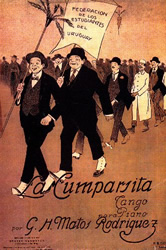 The song was then pressed as the B-side of a record, and had only a modest success, fading in familiarity before being completely forgotten.

In 1924, the Argentine Pascual Contursi wrote lyrics it – a story of lost love starting by “If you knew, that still within my soul, I keep the love I had for you…”. It soon became a hit and is considered the most widely known tango song in the world, closely followed by El Choclo.

What makes La Cumparsita so unique?

According to music composer and orchestra director Francisco Canaro, “La cumparsita has the particularity that its musical structure lends itself wonderfully to be embellished by orchestrations. Everything fits well with La cumparsita: counter melodies for violins, variations for bandoneons and other instruments. Every orchestra director has his own arrangement, his personal rendition of the celebrated tango.”

Why does la Cumparsita make you feel dozy?

La Cumparsita is used in traditional milongas as the last song of the last tanda to close the dance. So, if you feel dozy whenever you hear la Cumparsita, it is not because of the song itself but because it probaby is way past bed time! Night night…

See you tomorrow to open your next Tango Advent Calendar window! 🙂

By Tanguito|December 6th, 2016|Categories: All posts, For beginners, For tango dancers, Music & lyrics|