Today, 11th of December, is the National day of Tango in Argentina: during this day, Buenos Aires stops walking and starts dancing.

Every year, hundreds of dancers gather on the famed Avenida de Mayo to put their best foot forward. Traffic comes to a standstill as more than 10 bands perform on stages erected along the avenue to provide a musical backdrop for the Gran Milonga Nacional (the Big National Milonga).

Learn how the dream and determination of one man made this day a reality.

Why December 11 for the National Day of Tango?

The national Day of Tango is a big event in Buenos Aires: people take it to the streets and dance on Avenida de Mayo until the wee hours, milongas are crowded like no other day, TV stations broadcast documentaries about the history of tango, and even the Argentine president visits a milonga and trys a few risque moves (OK, I made this one up). But what’s the story behind this special day?

The national day of tango commemorates the birth of two legends of tango: the immortal legend Carlos Gardel, perhaps the most famous tango singer of all times, and genius orchestra conductor Julio de Caro: both born on Dec. 11th. 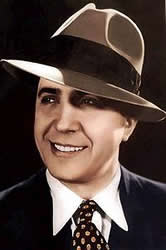 The national day of tango is the result of the dream of one Argentine, Ben Molar. In 1965, as he realised Dec. 11 was the birthday of Julio de Caro and Carlos Gardel, he approached the Secretary of Culture of Buenos Aires with a proposal to make this day the ‘day of tango’. Unfortunately, his proposal did not interest anyone, but he continued to push for his idea …. for 11 years!

After 11 years, he threatened the Secretary of Culture of the City to do it by himself and started to plan a massive festival in “Luna Park”, the famous Buenos Aires stadium. He approached Tito Lectoure, Luna Park’s owner, and had the radio, TV and various tango artists lined up for the event. At 2PM on the day of the ultimatum, the decree was finally enacted and the day officially became the Day of Tango in Buenos Aires.

On the first day of tango ever, the festival was attended by about 15,000 spectators, along with famous musicians, journalists and personalities.

The Day of Tango becomes national

Ben Molar decided to build on this momentum to make the Day of Tango a national event, so when the Secretary of Culture asked to organise a “farewell to 1977” tango party, he bargained that, in return, the Day of Tango would become national. It was accepted on December 23rd of that year. Since then, Dec. 11 is the NATIONAL DAY OF TANGO.

Time to go and have a dance to celebrate! Hasta mañana chicos!